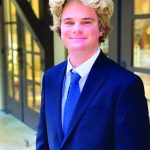 Story of a Hymn

Our opening hymn MC KEE was first arranged by British composer Samuel Coleridge-Taylor from an Irish tune that was adapted by African American slaves in the U.S. This tune became associated with the spiritual “I Know the Angels Done Changed My Name,” published in The Story of the Jubilee Singers with their Songs (1876). The Jubilee Singers traveled and performed African American songs widely across the U.S., raising the astonishing sum of $100K to support Fisk University in Nashville.

Harry T. Burleigh, a noted New York Composer later arranged the tune in the mid-1930’s to fit a text by William Arthur Dunkerley, a journalist and novelist from Sussex, England who wrote under the pseudonym John Oxenham. Burleigh named his arrangement after Elmer M. Mc Kee, rector of St. George’s Episcopal Church, New York and went on to promote it as part of the gospel music trend that swept across America in the first half of the 20th century. Ever popular, MC KEE still appears in more than 100 American hymnals.

Chris Fenstermaker is a senior at Pacific Grove High School. His piano studies began at age 9 1/2 with Barbara Ruzicka. He also plays cello with the Youth Music Monterey orchestra and chamber groups. In his free time he loves to surf at Spanish Bay.