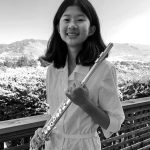 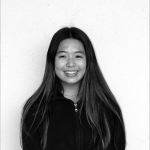 “Allemande” from Violin Partita No. 2 in D Minor……J. S. Bach

Music from Taizé originated in a small village not too distant from Lyon, France just before World War II. Brother Roger came to Taizé from the Reformed Church of Switzerland and founded an ecumenical community to help the needy.  Due to their proximity to the Swiss border, the community hosted many Jews fleeing persecution in France.  Worship at Taizé was based on the simple, often mystical tunes, set to scripture and composed by Jacques Berthier until his death in 1994.  Focused on praying the music, the Taizé songs and reflective style of worship has found its way into churches worldwide across many denominations.

Elena Oh, violin, is a senior at Santa Catalina School.  She has been studying violin since 2012. She initially studied with Rochelle Walton and now studies with Cindy Tien-Hsin Wu. She enjoys hiking and baking and hopes to study Economics or Public Policy in college.

Meya Lin, flute, first took an interest in the flute in fifth-grade band class and started taking private lessons in sixth grade. Her current flute teacher is Jennifer Candiotti and she is an 8th grade student at Stevenson School.