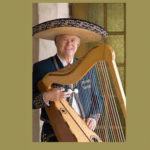 The Jalisco (pronounced Haleesco) harp was formerly the favorite stringed instrument for Mariachi (pronounced Mariachi) bands. In fact, Mariachi and tequila both originated in Jalisco, a state in western Mexico. With up to 36 strings, you might wonder if tuning it is like painting the Golden Gate Bridge – when you get to the last string it’s time to go back and start again, an added demand on dexterity that sets the harp player apart from other musicians. Tequila may have been a natural response.

Today’s harpist, William Faulkner, sent us a picture of his harp with his cat inside, peering out the sound hole.
(Aside: if there are a lot of bandaids on the hands and forearms, that means you’re dealing with a cat owner. Cats and bandaids go together like love and marriage, a simile that’s better placed than you might think on first encounter.) I’ve had some experience with cats, and here’s the news: playing the piano with a cat inside sounds like fun until you try it. Then not so much, except maybe for the cat. Still, if he can play his harp under those circumstances, he deserves our attention. Really, he plays so beautifully, even without the cat, he deserves our full attention. He’s been here many times before; it’s always a sweet pleasure to hear him play and admire his handsome costume.