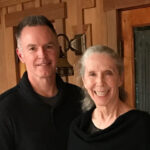 Today Jos Milton is our magnificent tenor soloist. He is on the music faculty of the University of Mississippi in Oxford, and he has recently collaborated with Melinda to produce a recording of contemporary art songs. In addition to being a consummate musical artist and teacher, Jos is an exceptional mimic, and he will play you back on the spot with wicked accuracy, so (unless you want to see yourself as others see you) be careful.

Oxford is in the deep south, with the the ambience of warm summer evenings and fragrance of honeysuckle. The English actor-writer Quentin Crisp said he loved the American South, because the people there want you to want something so they can get it for you. In the movie The Firm, the hostess of an elegant party tells a guest (Tom Cruise), “This is the South; we encumber you with hospitality.”

Many of you know longtime Church-in-the-Forest member Peppy Garner, who is Jos’s mother-in-law, and who is now in residence at the Park Lane. It was Peppy who brought Melinda and Jos together fourteen years ago and thereby ignited a long and fruitful artistic partnership.