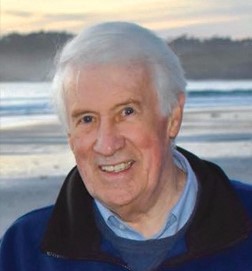 The Reverend Dr. William (Bill) Blyth Rolland, served as Stevenson’s chaplain and the Church in the Forest’s senior minister from 1998 until his retirement in 2017.

A native of Scotland (like the School’s namesake, the 19th-century writer Robert Louis Stevenson), Bill often said he had found his “heart home” on Stevenson’s campus, and specifically in the School’s beautiful Erdman Chapel, which is the Church in the Forest’s home. His students, faculty colleagues, and parishioners saw in him the embodiment of the School’s Latin motto, Suaviter in modo, fortiter in re (“Gentle in manner, resolute in action”), which emphasizes humility and perseverance.

Bill came from humble beginnings in Dunfermline, Scotland. While he never felt poor, his family lived in a small two-room tenement apartment tied to his father’s carpentry job, with a shared outhouse and one fireplace that used coal or peat for the home’s only heat. His parents never owned a home or even an automobile and were not educated beyond primary school. Education provided the foundation for Bill’s ascent to a nourishing life of consequence to countless others. As a teacher, coach, and pastoral counselor, he took particular delight in supporting students whose families, like his, had been underestimated by those around them owing to their limited financial means.